Below we picked up popular past article with high access count and updated it with new information so you can keep up with up-to-date information regarding IT job market in Japan.

With 2021 entering its 2nd month and despite past expectation that by this time the pandemic situation would already get under control, we are hit by the reality that no it is not. Especially in Japan, the prolonged emergency state situation surely impacted the job market landscape including job offers available for foreigners. So how is the situation? Is it good or bad? How is the IT industry faring in 2021 and forward? Check it out below

1. The Background of Human Resource Shortage in Japan IT Industry

From the figure above you can see the data of job market growth in Japan, it has been continuously expanding since 2015 and it has now already become a sales market. This trend is extremely obvious in the IT industry. In this industry, the shortage of human resources is expected to remain in the near future. It is deemed that this situation will not change even after 2030.

How to read the job opening-to-applicants ratio?

If the number of the job opening-to-applicants ratio is over 1, it means that there are more open positions than applicants on the market. If the number is below 1, it means that there is more people who look for jobs than open positions on the market. From the figure above, we can see that the job openings-to-applicants ratio of “technical(IT・telecom)” remains the highest since 2014. The actual ratio of technical (IT・telecom) job availability to each engineers is 7.29 which means there are 7 companies available for every 1 IT human resource. This data means the competition is hard for the hiring side.

While there is a significant drop in 2020 because of the impact of corona, but you can see that the graph is beginning to rise again starting from October 2020. Now that most companies already 'get-used' with how business and hiring works in time of coronavirus, they are already starting to actively searching for IT talents again and opening many job offers.

Technical positions in IT industry have completely become a sales market and this trend is expected to remain for a long time. A research concerning IT human resources, states that there will be a shortage of 300,000 IT human resources in Japan by 2020. For engineers in the IT industry, there is a lack of engineers not only in business system /enterprise system areas, but also other fields such as WEB sites · WEB applications creation, smartphone application, social game area, etc..

Why is there a shortage of engineers in Japan?

➀ The growth of web industry・IT market. Social, game and many big companies have connected with IT to expand their business. WEB applications or other tangible products can not be isolated from IT technologies. Therefore, accompanied with the growth of needs in various industries, companies and markets for IT technicians, the problem concerning the shortage of IT technicians becomes obvious.

② The aging of existing IT engineers Technical specialists who were building enterprise systems will soon be reaching their retirement ages. Recently young people tend to engage in Web/games creation, however there is a decrease in engagement in enterprise systems.

③ The negative image towards IT technicians There is a “3K” word in Japanese called “きつい(stressful)”, ”厳しい(strict)”, ”帰れない(can’t go back home)”. IT engineers in Japan carry a strong image of that. Although it once had a really cutting-edge and cool image, this image is becoming obsolete. Right now, many startup IT companies have already moved on to change the environment of engineers. But nevertheless, the bad image remains extremely strong in the Japanese mind.

④ The low salary of IT techinicians Although the number of companies like big internet companies or mega venture companies(DeNA/GREE/cyber agent/Rakuten etc.) that pay their new engineer graduates nearly 10 million yearly salary have increased, Japanese engineers still have a lower salary compared to overseas engineers such as engineers in Silicon Valley in America.

➄ Fast change in WEB · IT technology In the IT industry, technological changes and evolution are intense, so even after you have mastered a new technology, that technology can soon become outdated.

Reference: Report of Ministry of Health, Labor and Welfare International Talents Employment Status Summary In a document published by ministry of Economy, Trade and Industry Trade.

There were about 28,000 International engineers in Japan. In the figure above, we can see the nationalities of the non-Japanese people working in Japanese companies. The largest was Chinese with 53％, followed by Korea (16.4％) and America (4.3％). Recently there’s a growing need for employment of bridge SE (to connect overseas development apartment with Japanese domestic companies) or highly specialised engineers at low cost. The aim is to lower the hiring cost and expand offshore development. The Japanese government and companies have started to think about ways to make a better working environment for International engineers in Japan. While work-style reform started by Japanese government, following changes regarding to working environment have been taken into consideration.

What Kind of International Engineers are Needed in Japan 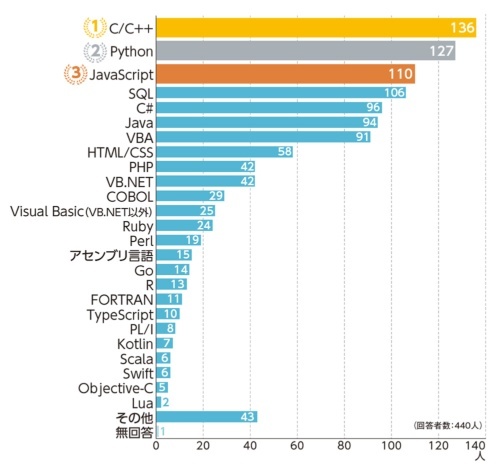 According to the survey conducted by 日経×TECH in 2020 about programming language commonly used by IT engineers in Japan (440 respondents). The top three are C/C++, Python, and Javascript. If you are interested in finding IT engineering jobs using those languages, you may click on each languages to find new job opportunities  you can apply directly from Mixess.

There is this popular believe that for IT engineers working in Japan, it’s not a big problem if you can’t speak fluent Japanese. While it is true that things related to programming can be done in English, for project operation and team management a basic Japanese skills will be fundamental. Not long ago, N2 has been the lowest requirement for most companies, but because of the shortage of human resources, the N3 as the lowest requirement for engineers can be found more frequently. While you may find some openings that did not require Japanese language skill as a must requirement, if you are aiming for senior or more advanced career path then having the skills will be more beneficial.

Although it’s a sales market right now, it’s actually not easy to find a job for a fresh new IT graduate as most companies hope to find people who can hit the ground running, therefore only when it’s hard to find those experienced people, companies will start to think about hiring new graduates. This situation happens in industries or companies where there is a shortage of human resources and when they can’t find candidates because they limit the requirements to experienced people.

④ What positions are available?

As IT is developing more and more in Japan, the needs for “Development personnel(application related)” keeps increasing. The shortage of people in this field is expected to continue and at the moment it is the occupation that has the largest need for candidates. In this part, we are going to introduce 4 types of development engineers and their salary in Japan.

Development of all the things that we see normally from smartphones or PC such as web sites, web systems etc. happen because of the work of web engineers. Therefore, even in IT industry, the need for web engineers can be seen as a huge issue. Among 5,736 engineer jobs in Japan's biggest job searching site, 2,589 cases are web engineers. The languages used for web engineers are mostly Java, PHP, Javascript, Perl etc. Java is said to be the best to learn as it has high versatility in object-oriented languages and also among 2,589 web engineer cases in DODA, 1,951 cases are the job postings concerning Java.

Engineers who create games for home use, smartphones, PC. Along with the activity of smartphones, release of Nintendo switch and PS4 etc, game market is expected to expand continuously. Languages required in this area are mostly Swift（iOS, Java（Android), Ruby etc.

Development of systems or microcomputers implemented in cars or air conditioners is the work of Control and Embedded Engineers. The work of embedded engineer involves systems used on one machine such as thermometers, TVs, cars etc. Unlike the WEB engineers, knowledge of systems or home appliances (television, car etc.) is necessary, therefore it requires a high proficiency. Accompanied with the development of IoT, the need for this type of engineer is expected to increase continuously. Languages mostly used in this area are C, C++.

Bridge SE are engineers who do the interpreting work between Japan and overseas when development is assigned to overseas’ team. Because it lowers the cost of human resources, 70％ of projects of big companies are assigned to overseas. Not only a wide range of IT knowledge is needed for this position, but also English has become a necessary requirement.